We arrived at the Samata school in Pokhara every morning to the sound of the whole school singing and praying, whilst lined up in rows and getting warmed up for the day’s learning with stretching exercises.  Standing on the podium directing the performance every day was Sanjay: a twenty year old science teacher at the school. Not a foot was out of line, a tie misplaced or a child not singing as he had every student’s attention focused on him.

The group of Samata schools , locally known as ‘bamboo’ schools due to their structure, are a little bit different to other Nepali schools. Debate Mate has just last week completed working in four of these schools (there are over twenty across the country) in Kathmandu, Bhaktapur, Banipur and Pokhara for three weeks teaching children the art of debate. This is the second time we have run a programme like this. Whilst teaching the programme during school time I was able to speak to several of the teachers and learn a bit about how the school is run.

The group of schools were founded by an inspirational Nepali man named Utam, who returned from the glamour of Bollywood to give the gift of education to poor Nepali children. The schools charge just 100 rupees a month per student, around 70pence ($1) which is a viable alternative to the oversubscribed government run schools or very expensive private schools. Unlike most schools in Nepal, Samata employs young student teachers to work in its schools. This is frowned upon by much of the older teacher population who believe that experience and expertise breeds the best teachers. However this model of hiring young enthusiastic bright teachers is becoming popular across the globe, with programmes such as Teach First (UK), Teach for America and Teach for India growing in presence.

Sanjay is most definitely one of these bright enthusiastic teachers. He came from the first cohort of students to complete their School Leaving Certificate (age 16) at the Samata school in Kathmandu. After focusing on science in his Plus 2 years (akin to A level or 6th form) he was then sponsored by the school to undertake his bachelor’s degree in teaching whilst being employed at the school in Pokhara ; a six hour bumpy bus journey away from his friends and family in his home town.

Every morning for six days a week, Sanjay wakes up at 5:00am in his small bedroom upstairs under the tin roof of the school. He then takes a fifteen minute walk to his college classes which run from 6am to 9am. After which he returns to start the assembly at the school and teaches until 4:15pm with a half hour for lunch. At 4:15pm however the day is very much not over. Several days a week he leads extra classes for struggling students for an hour or so after school. Most evenings he also undertakes private tutoring ,  from those who are able to pay, until 7pm to top up his small salary.  By the time it comes around to Saturday, his one day off, he is exhausted. ‘I just sleep, until maybe 12 o’clock!’ he exclaims with a guilty grin of a child who has just finished all the sweets. He might spend his afternoon catching up with a good book or going to the cinema with a fellow teacher.

What is even more inspirational than his handling of a hectic schedule is how he is in total control of the school. From what I could gather it is not a formal role he has been assigned but he has adopted the role of school co-ordinator. He knows what is going on in every class for every lesson of the day. He disciplines the students and makes sure everything runs smoothly. Sporting maturity far beyond his twenty years he regularly challenges the Principal, who is twenty years his senior, on the set up of the school. He really does run the show and the school would sure fall apart without him. ‘There has to be order’ he says, a significant break away from the typically relaxed Nepali attitude to time and scheduling. He would organise which students we would be taking in each of our debating lessons, popping in to check everything was ok whilst still taking his own classes.

Although he has a fairly strict approach for someone so young, he is very much a firm but fair teacher and the students absolutely adore and respect him for it. He shows signs of supportive and encouragement to every one of the 1000 or so students at the school, which goes from nursery until grade 10 (age 16) and appears to know most of them on a personal level.   Many of the children look up to him as a role model to whom they can relate. This is so important yet so often overlooked in many schools in the developed world. He is also prepared to make changes and to try to spice up the school curriculum which is taught via archaic textbooks with no computers or practical lessons. According to Sabina, another twenty- three year old student teacher at the school, most of the older teachers in other schools simply dictate their lessons to the students, so rarely engaging them critically.  This is why the school were so keen to have us return to teach them debating after our successful programme there in 2010. Sanjay remarked on how much he would have benefited from debating at school and looked longingly on at our classes. He laughed shyly when I suggested a teacher versus student debate, but was beaming with pride when eight students battled it out at the final of the competition in front of the school.

Sanjay, like many others in the Samata schools I’m sure, is a true inspiration to teaching and education as a whole. He single handily proves that you don’t need a phD to teach secondary school students, but illustrates that what is most important is to show the students that you care and provide some stability and something to look up to in their lives.  And of course consequently they develop a thirst for knowledge and will no doubtedly succeed, despite the obvious obstacles in their way. 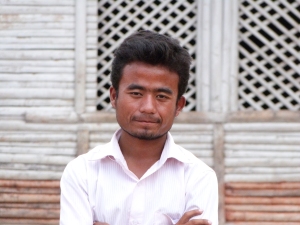